Did you feel it?  Just then.  We sat up straight and faced the sun.  One minute later and we’re already leaning back in our gravity chair.  Today tonight there was balance: dark and light. Tomorrow we begin accumulating minutes of dark, minutes like black commas erased from a worn-out page.

Owl found this.  It feels like dark minutes, in the months ahead, accumulating:

The near future I commit to crow.  I will scrapbook a phenomenology of crow morphology.

I’m also working on a piece of fan-fiction, a fiction by which I fan my fire for my favorite movie.

May your mind be electrified.  May many small lights turn on.

why does the phoenix (6–tap tap beautiful) 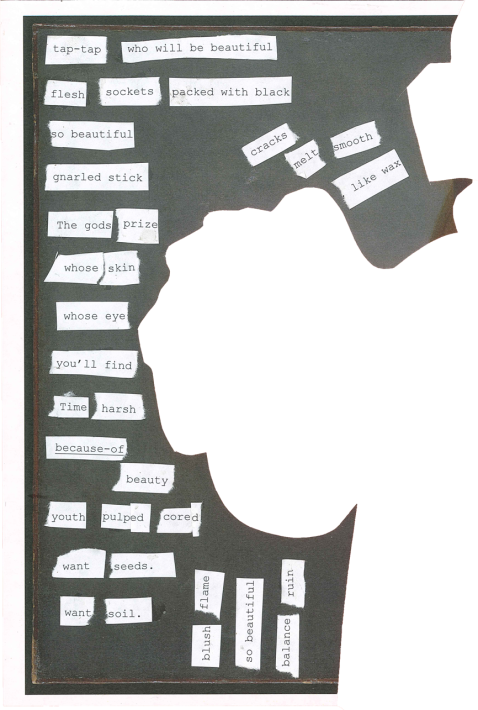 tap tap, who will be beautiful, flesh sockets packed with black?

the gods prize whose skin whose eye?

The phoenix burns billet-doux on my pillow.  Read the last one here.

figure (anamorphosis) was my 100th scrapbook page!  One hundred is a special number because I have ten fingers and a hundred is ten to the second power.  I will have to publish 1,000 pages before I reach another power of ten. 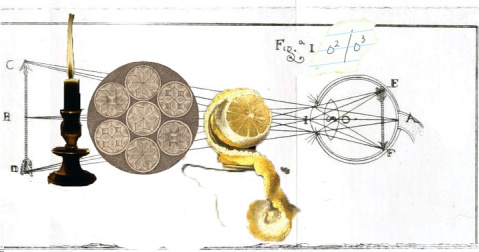 One thousand scrapbook pages!  Taped in a line on the walls…or bound into a book?  A record of the evolution of someone called “I”?…or ever-more intimate layers, papery tissues, peeled off with each page turn?  If the pages only reveal what was always there, what will be unveiled when the last obfuscation is lifted, the last page turned?

A funny endpaper, the edging of a book.  The knobby surface of my old desk, slid up beneath the window of the obelisk.   For you…a still, illuminated screen?  What lingers in the mind as our eyes lift to the view…who will sit, unveiled, in our thoughts, perplexing and welcome, when the scrapbook is at last closed? 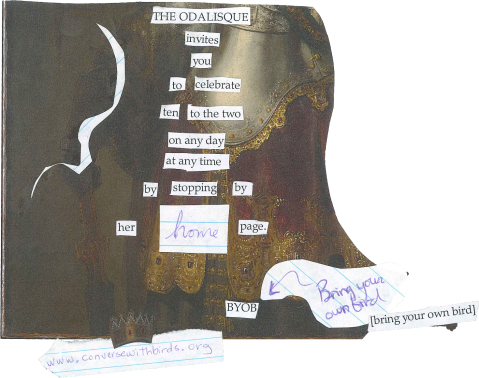 of my favorite pictures

can read an odalisque primer, hear my dreams, watch my movie, and browse some of my favorite pages from each obelisk year.

All this, and we are not even finished with year 2.

It’s sandy here.  I don’t know what happened.   Wind outlandish wind a storm of wind that rattled the bed frame and deflowered windows, shattering glass.  In the morning, a pile of sand, like an hourglass emptied on the floor of my obelisk.  What duration was being measured?  What, now that the sand has sifted, will soon cease?  Is it bad luck to smash a glass of hours?  What will I do with this temporal pile of sand?

Crow would like me to build an impermanent castle.  Black swan says sand is good for wallowing in, shuffling grit into the itchy place between the wings.  The starlings swoon in discrete calculations- one grain per pursed beak, which will be more numerous?

Hawk sees in the pile of sand a microcosmic manifestation of our parched souls.

I need a broom.  It was Halloween and I wanted to be a witch because that’s what you call women who fly.  I want to fly but I don’t have a broom, so I dressed up as Owl instead.  Owl took one look at my costume and said “isn’t that a bit like gilding the lily?”  I’m not sure if “lily” refers to me or Owl.

Owl was disgruntled with all costume choices.  “Why can’t I be a fish or a movie star or a fantastic aviation device?” moaned Owl, clearly under the influence of my first movie (have you watched it?)  No, Owl is, this year, a very perturbed cupid.  Here we are, with my inexplicable heap of sand:

Owl has no access to electrical equipment at this time, so we had to take a photograph of ourselves in our costumes.  I will post a scanned version, soon.

**Here’s the scanned version of our Halloween costumes.  It enlarges :

I am the odalisque who lives in an obelisk. I converse with birds.